Last October astronomy was rocked by a major sexual-harassment scandal (see, for example, the articles at BuzzFeed, Newsweek, and Space.com). In early January, at its annual winter conference in Kissimmee, Florida, the AAS held a well-attended plenary session to address harassment and next steps.

To an outsider, the many articles reported from the meeting (e.g., Scientific American, The Atlantic, and Mashable.com) might make astronomy seem like a bad place for women. But having worked in physics and astronomy for some 40 years, I see all this bad news about astronomy as really good news.

You don’t worry about the mosquito buzzing around on a summer evening — it’s when the buzz stops that the mosquito might be biting you. (And yes, I know, it’s the female mosquitos that do the biting — it’s not a perfect metaphor.)

When I was starting out in science, no one talked about this stuff. It was not uncommon for professors and teaching assistants to date or marry their students. While many astronomer couples have been happy and productive for decades, romances also fail, which usually meant women left astronomy. (It isn’t all senior men with junior women, but survey data show that’s the usual case.)

Results from a recent AAS survey (PDF) were reported at the AAS plenary session on harassment, defined as unwelcome conduct that is based on race, color, religion, sex, national origin, age, disability, or genetic information. 82% of astronomers identifying as women have heard sexist remarks from their peers; 44% heard sexist remarks from supervisors; 9% experienced physical harassment from peers or supervisors. 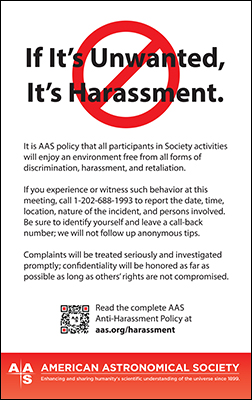 The AAS is taking steps to solve the problem of harassment in astronomy. It helps that there are many women astronomers these days. Half the AAS Officers and Councilors are women. Women are nearing parity at conferences and in plenary talks (though this refers mainly to white women; women of color and gender minorities have not yet made similar progress).

Male astronomers are also outspoken supporters of women in astronomy (e.g., here and here). The AAS anti-harassment policy defines a path for reporting, investigation, and sanctions. At the AAS-meeting registration desk, a prominent sign stated, “If It’s Unwanted, It’s Harassment.” A grass-roots “Astronomy Allies” effort at AAS conferences provides support to women who report unwelcome attention of any kind.

While the AAS is mainly about science rather than social justice, we don’t hesitate to tackle these difficult issues.

Places that don’t talk about harassment are places where people shouldn’t feel safe. Not that astronomy is perfect — far from it — but nowadays we work on improving the profession, being more inclusive, getting rid of filters that don’t select for merit, and changing practices that exclude some of the best and brightest. AAS committees (e.g., CSWA, CSMA, SGMA) educate us about professional challenges for minority groups and suggest positive steps that will help us improve. And we talk about this stuff, prominently, at AAS conferences and in many of our workplaces.

As my friend, Phil Plait, the “Bad Astronomer,” said, the first step toward making things better “is to acknowledge that [harassment] is happening, and it’s happening everywhere. It’s not just astronomy, it’s not just science, it’s everywhere.”

Will there be more bad news in the coming year? Probably. Even though the vast majority of astronomers are not serial harassers, I know the number of bad actors isn’t 0 or 1. And even one is one too many.