The AAS Council met for two full days before the start of the 227th meeting in Kissimmee, Florida. The first day was our informal “strategy day” — no gavels, no motions, no official business — where we thought about broad issues facing the Society and the profession and mapped out future directions. The second day was the formal Council meeting, which any member could attend. (We ask only that members notify the Secretary or the Executive Officer in advance, so that we may plan for sufficient seating.) 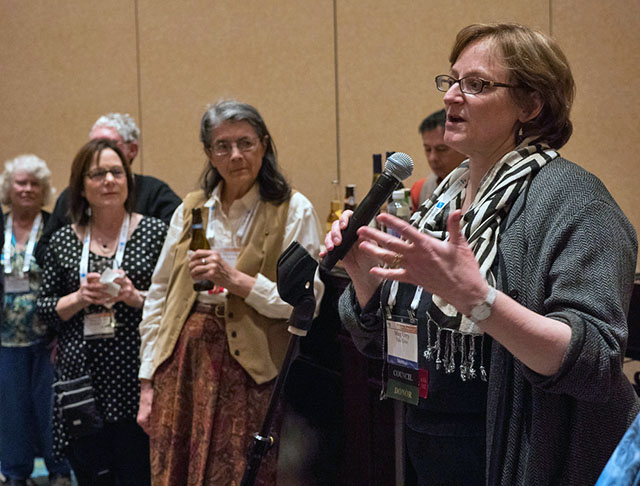 AAS President Meg Urry addresses attendees at the "40+E" reception honoring
emeritus members and those who have been members of the Society for at least
40 years. AAS photo © 2016 CorporateEventImages/Todd Buchanan.

The actual Council meeting took place on Monday, 4 January. As the governing board of the AAS, the Council has fiduciary responsibility to approve budgets and expenditures, to determine matters of policy and practice, to oversee the Executive Officer, and to guide activities of the Society. Often, recommendations for action are brought to the Council by one of our committees, which are focused around key issues of importance to the Society. This particular Council meeting was, as usual, chock full of essential actions. In this column, I thought I’d run through the many actions we took, so our members are fully informed — and, if I’m honest, so you all get an idea of how hard your Council was working, for you.

Then on to regular business: The Council approved the 2016 AAS Prize winners, each recommended by the corresponding committee, as well as one new Honorary Member, Beatriz Barbuy. After I notified the prize winners, it was fun to get their responses — surprise, delight, and even humility. The Council also approved new appointments to the prize committees and other standing committees.

One of the Council’s most significant actions was the approval of an AAS Statement about the use of Graduate Record Exams in graduate admissions to astronomy and physics programs. Because the correlation between GRE score and longer-term career success is weak, and the correlation between GRE score and gender or race and ethnicity is much stronger, we were concerned that GRE scores are potentially discriminatory; strict cutoffs, for example, make the rejection rate for women and people of color much greater than the rejection rate for white or Asian-American men, without commensurate improvement in the quality of the admitted students. Also, the cost of taking the GRE and sending scores to multiple institutions is non-trivial and is a significant barrier for low-income students, a matter about which the Educational Testing Service is also concerned.

The AAS Statement on the Use of the GRE was nearly a year in the making. It began with the Committee on the Status of Minorities in Astronomy, in consultation with the Committee on the Status of Women in Astronomy and the Committee on Sexual-Orientation and Gender Minorities in Astronomy. They gave us a draft statement last fall, and after input from the Council, I sent the draft statement to chairs of astronomy departments two months ago, so that they could consider it in the context of this year’s graduate admissions and so that we could get community feedback before Council action. (Thank you very much for the many thoughtful comments.) Improving equity and inclusion in astronomy is a major goal of the AAS, and the GRE statement is a concrete step in this direction.

One of the Council’s most important responsibilities is the financial health of the AAS, which has an annual budget of the order of ~$10 million, mostly tied up in journal expenses and revenues. In Kissimmee, we unanimously approved the 2015 budget status report and the 2016 budget adjustments submitted by the Executive Office. The AAS keeps a reserve fund of roughly one year of operations costs, which is invested according to our Investment Policy Statement. As the AAS Investment Advisory Committee is presently updating this statement, we added a new member, Buell Jannuzi (currently a Councilor) to that committee. The Investment Advisory Committee's charge is to suggest an investment strategy that maximizes returns while keeping risks low. Our Treasurer, Nancy Morrison, plans to present the revised statement for approval by the Council at or before the June 2016 meeting. The Chief Financial & Operating Officer of the AAS, Kelly Clark, was appointed staff liaison (ex officio) to the Investment Advisory Committee, as per best practices.

At the Honolulu meeting last August, the AAS Council began to formulate a new strategic plan. One clear outcome was the need for a review of AAS governance, which has changed little over the past 50 years despite explosive progress in our science, rapid change in the demographics of our discipline, and a complete transformation of our modes of communication. In Kissimmee, the Council unanimously approved the AAS Task Force on Governance, to be chaired by former AAS President David Helfand. This task force will be appointed and begin its work over the next weeks.

The Council also approved unanimously the formation of an Education Task Force, to develop recommendations for a prioritized portfolio of education-related activities for the Society to pursue. There is complete agreement on the Council and throughout our membership that education is central to astronomy, and of course many members are deeply engaged in education issues. But there is rather less agreement on what AAS-centered efforts in this area should be. The Education Task Force will help us develop a coordinated education strategy as well as metrics for its success. I anticipate appointing ETF members over the next weeks.

Pursuant to a proposal from a group of AAS members, the Council unanimously approved the formation of the AAS Working Group on Accessibility and Disability (WGAD, pronounced like “wicked”). Inaugural co-chairs are Wanda Diaz-Merced and Nick Murphy. We are all very enthusiastic about this newest part of our strategy on equity and inclusion. At the Inclusive Astronomy meeting last June, we saw and experienced the many ways in which we could do better.

The Council approved the recommendation of the WorldWide Telescope (WWT) Task Force, led by AAS Vice-President Jack Burns, to assume leadership of the WWT project for the next two years. WWT has the potential to enhance our journals (one example being video abstracts with data-based animations), and it can also be used for public outreach, education, data archives, and research. The Council authorized a plan to hire two FTE's in the near term, with the expectation that the project will be self-supporting and hit target metrics within two years. In the past, the AAS has prospered by being ahead of the game on technical matters. For example, we got into electronic publishing very early, and we helped launch the WarpSpeed software that has greatly enhanced our Speaker Ready process at meetings. It is the Council’s intention that WWT lead to paradigm shifts of comparable importance to the astronomical profession.

About 20 years ago, the Council approved a change of the language in the AAS Bylaws, changing all occurrences of “he” (until then, astronomers were referred to only with the male pronoun) to “he or she.” At the time, this felt very progressive — a demonstration of our aim to be inclusive. These days, it looks rather exclusionary, gender being more complicated than the binary “he or she” — and indeed, being fluid for many (see "More Universities Move to Include Gender-Neutral Pronouns"). The Executive Committee discussed this issue in the fall and directed the Secretary’s office to draft a revision that would omit the fixed-gender pronouns altogether. We flirted with the use of “they” as a gender-neutral pronoun, but some remain disturbed by its use in the singular case (but see "A Question of Singular Importance" and "Everyone Uses Singular 'They,' Whether They Realize It or Not" for illuminating discussions of the historical use of the singular “they,” including by Shakespeare himself), so we found a solution that replaces the singular pronoun with the actual noun (“the Secretary found that the Secretary could edit in this way”).

Because Bylaw revisions must be vetted by the AAS membership, we approved the approach in principle but tabled the item for a vote at the June Council meeting. In another step toward inclusivity, we suspended until Summer 2016 the rule that prohibits junior and associate members from being members of working groups and committees. In June we will consider a permanent change to the Bylaws, with appropriate notice to members, but in the meantime, this permits junior and associate members to contribute more directly to the work of the Society.

It is by now clear to all astronomers that sexual harassment is a concern in our profession. As President, I have heard many expressions of concern and outrage that our junior members, especially, are threatened by the actions of a few senior members. Many of us have written to support young scientists who come forward in order to improve our profession for all. We issued a statement in the fall stating the seriousness of this issue and expressing “unequivocal support for the people who risk their own professional status by speaking publicly in order to protect others from similar abuse.”

On 2 January, many on the Council received an email from Tim Slater accusing the AAS and its Committee on the Status of Women in Astronomy of conducting unauthorized, proactive investigations into the behavior of astronomers in their home institutions and asking that it be added to the agenda under “New Business.” He has since posted this letter online. The Council did add this letter to the agenda; we concluded that the allegations needed to be investigated carefully, point by point, after the AAS meeting, after which we would respond directly to Dr. Slater.

And, with that, our Council meeting concluded, only 30 minutes behind schedule. Truly a full day of business — though not the end of AAS business, as Councilors raced to participate in the spectacularly successful undergraduate reception (the largest gathering of undergraduates in science anywhere in the world), the 40+Emeritus reception, the opening reception....