This announcement is adapted from a NASA/SSERVI press release: 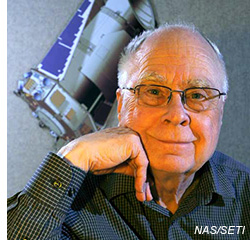 William J. (Bill) Borucki has been awarded the 2015 Shaw Prize in Astronomy. The announcement of this prestigious award, often referred to as the "Nobel of the East," was announced on 1 June in Hong Kong. The prize honors Bill for "his conceiving and leading the Kepler mission, which greatly advanced knowledge of both extrasolar planetary systems and stellar interiors." The award will be presented on 24 September and is accompanied by a prize of $1,000,000 (US).

Bill is in his 53rd year as a devoted civil servant at NASA's Ames Research Center. He started his federal service in 1962 working on the development of the heat shields for the Apollo mission in the Hypersonic Free Flight Branch at Ames. After the successful Moon landings, he transferred to the Theoretical Studies Branch where he investigated lightning activity in planetary atmospheres and developed mathematical models to predict the effects of nitric oxides and chlorofluoromethanes on Earth's ozone layer. He is now a research scientist in the Space Sciences and Astrobiology Division at Ames, where he is the Science Principal Investigator for the Kepler mission.

Kepler has proved that planets are common in our home Milky Way galaxy. While this result has written a compelling narrative in contemporary astronomy, it obscures the fact that it took the sheer determination of Bill and fellow team members to arrive at this milestone. In a lesson for science dreamers and future principal investigators, it took four proposals spanning a decade before Bill and his colleagues proved the efficacy of transit photometry for discovering Earth-size planets around solar-type stars. Since its launch in March 2009, Kepler has revolutionized humankind's view of our place in the universe.

The Shaw Prize is the latest in a series of prestigious awards that have been showered on Bill and/or the Kepler team in the past few years. These awards include the 2015 National Air and Space Museum Trophy for Current Achievement, the 2014 National Space Club Robert H. Goddard Memorial Trophy, the 2013 National Academy of Sciences Henry Draper Medal (also won by eight Nobel prize winners), the 2012 American Institute of Aeronautics and Astronautics Space Science Award, the 2012 SPIE Goddard Space Science Award, the 2012 Space Frontier Foundation Vision to Reality Award, the Space Foundation's 2012 Jack Swigert Award for Space Exploration, the National Space Club's 2012 Nelson P. Jackson Aerospace Award, the Astronomical Society of the Pacific's 2012 Maria & Eric Muhlman Award, and the American Astronomical Society's 2011 Lancelot M. Berkeley Prize for Meritorious Work in Astronomy.