A Report from the UN/Japan Workshop on Space Weather 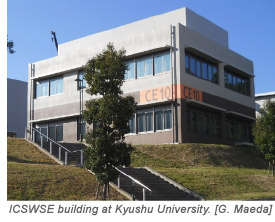 From 2 to 6 March 2015 the International Center for Space Weather Science and Education (ICSWSE) at Kyushu University, Fukuoka, Japan, hosted the United Nations/Japan Workshop on Space Weather: Science and Data Products from ISWI Instruments, on behalf of the government of Japan. This workshop was organized as part of the 2015 activities of the United Nations Programme on Space Applications, endorsed by the Committee on the Peaceful Uses of Outer Space (COPUOS) and the United Nations General Assembly. The International Space Weather Initiative (ISWI) is part of the United Nations Basic Space Science Initiative (UNBSSI) that was initiated in 1988 and has been holding workshops annually since 1991 in the five economic and social regions of member states. ICSWSE was inaugurated in 2012 and is one of the research and education centers developed through UNBSSI.

Around 100 scientists from 32 nations gathered at the workshop to assess the status of ground- and space-based space-weather instruments and to discuss data access, analysis, modeling, and interpretation efforts to advance space-weather research and improve space-weather forecasting. Space weather, or the Sun's effects on near-Earth space, can cause disruptions and failures of communications satellites in geostationary orbit, particularly elements of the Global Navigation Satellite System (GNSS), and can severely damage ground-based infrastructure. On behalf of the United Nations, preparations for the workshop were led by Dr. Takao Doi, a former astronaut and veteran of two space missions, and Dr. Werner Balogh, an astrophysicist working at the UN. The workshop also reviewed international cooperation activities in addressing space-weather-related matters such as possible further cooperation toward a global space-weather monitoring capability. This capability will be necessary for future human exploration of the solar system, when astronauts travel beyond the protecting confines of Earth's magnetic field. A special lecture titled “Nonadditive Entropies: From Einstein to Space Weather” was delivered by Prof. Constantino Tsallis (Brazil). 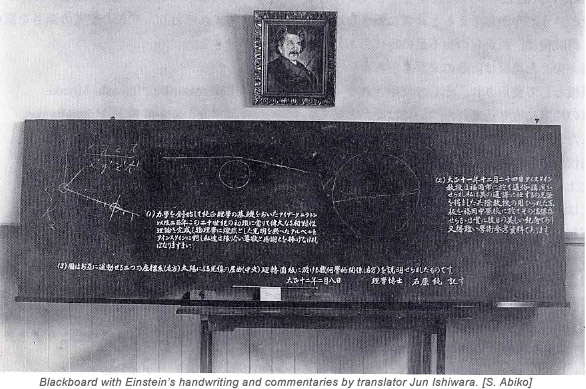 The UN/Japan Workshop was also an opportunity to remember Albert Einstein's visit to Japan in 1922, specifically his visit to Kyushu University and his long talk given at the university. On 24 December 1922 Einstein gave a 4-hour lecture, “On the Special and General Principles of Relativity,” to about 3,000 listeners  at the Hakata Daihaku Theatre. Since the inauguration of ICSWSE historians have been searching for the blackboard utilized during Einstein's talk. A photograph of the blackboard was reproduced for the first time in the 1987 book Albert Einstein: A Photographic Biography by Kenji Sugimoto. The diagrams on the blackboard are by Einstein, but the Japanese notes on the blackboard are by Jun Ishiwara, his translator and interpreter throughout the trip. The image credit for the picture in Sugimoto’s book is "Eiji Ishitobi, Fukuoka, Japan," but attempts to identify this person have failed. Sugimoto, who died in 2006, claimed that the blackboard is preserved in a high school or at Kyushu University in Fukuoka, but all attempts to find it have also failed.