The following notice comes from Jennifer Rumburg at NASA Headquarters: 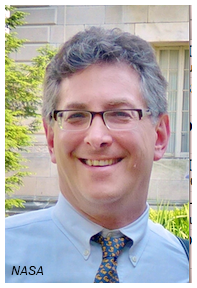 Dr. Newmark graduated in physics and astronomy from the University of Rochester in 1985 and received his PhD in astronomy in 1990 from Pennsylvania State University. He has held positions at NASA's Goddard Space Flight Center working on the International Ultraviolet Explorer (IUE), the Cosmic Background Explorer (COBE), and the Solar and Heliospheric Observatory (SOHO).

Prior to coming to NASA Headquarters in 2009, he worked for the Naval Research Laboratory, where he participated in the hardware development of the Solar Terrestrial Relations Observatory (STEREO) Sun-Earth Connection and Heliospheric Investigation (SECCHI) and served as the project scientist on two sounding-rocket investigations. At NASA Headquarters Dr. Newmark was the program scientist for the Explorer and sounding rocket flight programs. As the strategic planning lead for heliophysics, he has charted the division's course for the future by planning missions and enabling research to study the Sun and its interaction with the Earth and the solar system, including space weather.