The third data release (DR3) for the Digital Access to a Sky Century @ Harvard (DASCH) is now available from the project website. DASCH provide images and fully-processed astrometry (~0.5–3 arcsec, depending on plate series) and photometry (RMS ~0.1–0.15 mag) from the digitized Harvard plates for the full century (1885–1992) of coverage. Lightcurves (~500–2,000 points, typically) and magnitudes are readily available for each resolved object, with limiting magnitudes typically B = 14–17 depending on plate series and exposure times. 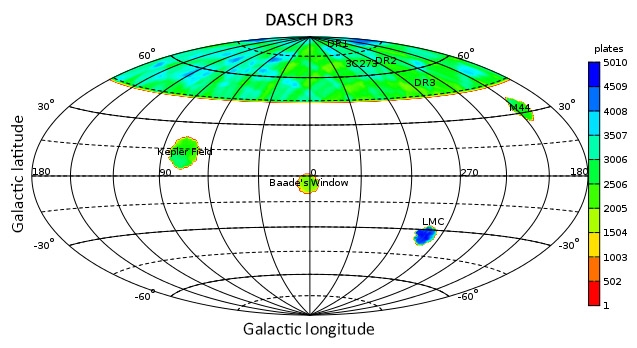 We project the DR4 (b = 45°−30°) release for November 2014. With increasing sky coverage per Δb = 15° release as we approach Galactic latitude b = 15°, the number of plates will increase in each of DR4 and DR5, and then again over the southern galactic cap (DR6−DR10) and finally the galactic plane (DR11−DR12). With now increased plate-processing staff, in DR4 we shall achieve the original production-processing goal of ~400 plates/day to enable the full-sky DASCH database to be online by 2017.

DASCH is grateful for the support provided by NSF, now with grant AST-1313370. Coauthors on this report are Alison Doane, Edward Los, George Miller, Robert Simcoe, and David Sliski, all at the Harvard-Smithsonian Center for Astrophysics.