Past President's Column: A Day in the Life of a Disabled Astronomer 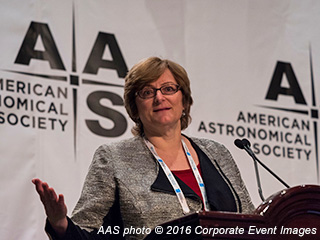 In January 2016 the AAS Council unanimously approved the formation of the AAS Working Group on Accessibility and Disability (WGAD, rhymes with “wicked”). The co-chairs are Wanda Diaz-Merced and Nick Murphy. The AAS is very enthusiastic about this newest part of our strategy on equity and inclusion. At the Inclusive Astronomy meeting in June 2015 we saw and experienced the many ways in which we could do better. This Working Group is one example.

By pure coincidence, I re-injured my knee on the first day of the January AAS meeting, badly enough that I could not walk or stand. Thanks to the AAS meetings team, I was able to see a doctor and get immediate relief, but I was told to stay off my feet. I spent the rest of the meeting zipping around in a rented electric cart. Believe me, I encountered issues I never had to think about before. (The irony of having just approved WGAD was delicious.) For example, it’s hard to read posters from below, it’s difficult to get lunch quickly when it means at least two elevator rides, and all conversations center on the disability (what happened? are you all right? and lots of extremely kind concern expressed by colleagues). Most disturbing to me, however, was this: I was too eager to explain that my electric cart was a temporary thing and that I would be back to normal once I got an MRI, returned home, etc.

Why was I so eager to say I’m-not-the-person-in-the-cart? I had to examine my motives and admit something awful: I didn't want people to think I was over the hill or somehow less capable than the walking-Meg was. Now, why would I think people would think that? Clearly, I have those prejudices myself, however buried they might be. As I raced on foot around past AAS meetings, I must have unconsciously thought my friends with canes or chairs or carts were somehow past their prime. This is so obviously foolish and unfair that I’m reluctant to admit it. But I have to. Like many prejudices, only when we admit to having them can we consciously try to overcome them.

Of course, I knew my days in the cart were limited, so my experience was not the same as someone with a permanent physical impairment. But I got at least a small glimpse of what that could feel like. It’s tough to rush from one session to another. And I made a list of modifications that would be helpful, such as lap desks for buffet meals, food available on every floor, ramps for speaking platforms, chairs and stools for people who cannot stand for long, and routine use of microphones by speakers and questioners since people in the audience might be hard of hearing. The AAS meetings team is including more and more of these accommodations; please send them additional suggestions.

Using an electric cart is a visible disability. More pernicious in some ways is how we deal with invisible disabilities. First of all, those of us who have invisible disabilities often choose not to disclose that fact. I have had serious problems with arthritis for more than 25 years; my knee injury was one manifestation of that, recurrent migraines are another, and I have other challenges. Until writing this article, I chose not to mention my physical challenges openly because I thought it might allow others to decide for me what I could or could not do. But I learned recently from a WGAD colleague that when established astronomers disclose their disabilities, it increases the visibility of role models and makes it harder to discriminate against those with visible disabilities. So maybe more of us should talk about the challenges we face.

Of course, that will become easier as discrimination on the basis of disability decreases. It’s tough in a society that openly discriminates and/or attaches other abilities to physical abilities. My image of myself is as a very high-energy person, always doing many different things. If my life is not busy, I layer on some more work. But I certainly have not been high-energy 100% of the time since I was a graduate student. I have some inflammation that kicks up when I get overtired. I do pull the occasional all-nighter to finish a proposal, and I weathered the six-day marathons of presidential duties at the AAS but always had to pay for it later. I hid all this partly because it felt private and partly because people might underestimate me if they knew about this stuff. Would they think, “Meg is slowing down, we’d better not think of her” to do this or that?

Maybe. Because I might have thought the same about others. Admitting that feels like a great moral failing. But unless you interrogate your biases, it’s really hard to overcome them.