...But Two More Years Without a Sequester as Congress Votes to #RaisetheCaps

As many in the country slept Thursday night, 8 Febuary, the federal government shut down for the second time in 2018. At issue was — and remains — Congressional passage of full-year appropriations for fiscal year (FY) 2018, which began 1 October 2017 but remains operating at FY 2017 levels until final spending decisions are made. The fourth Continuing Resolution (CR) of FY 2018 expired at 11:59 pm EST on Thursday, 8 February; Congress's failing to pass another CR or a full-year spending agreement triggered another "lapse in appropriations," hence the shutdown.

The shortest shutdown ever ended after only a few hours, however; the government reopened before many federal employees reported to work Friday morning after HR 1892 passed both chambers of Congress and was signed into law. HR 1892 includes another stopgap funding measure — the fifth CR of FY 2018 — that keeps the government open and operating at FY 2017 levels until 23 March.

Though the detailed spending decisions for FY 2018 have again been postponed, the vote to reopen the federal government early Friday morning did resolve another outstanding issue: HR 1892 included a bipartisan agreement to raise the hard limits on the discretionary budget caps for FY 2018 and FY 2019, which were set by the Budget Control Act (BCA) of 2011. In an attempt to reign in federal spending, the BCA set caps on both the defense and nondefense discretionary components of the federal budget through FY 2022. If Congress were to pass appropriations at levels above the caps, then drastic, across-the-board cuts known as "the sequester" would kick in. However, starting with FY 2014, Congress has acted to override the BCA, after the country operated under sequester for the last seven months of FY 2013. The consecutive two-year budget deals raised the discretionary caps above the BCA mandates; see the following plot of the nondefense discretionary cap over time from Matt Hourihan and David Parkes of the American Association for the Advancement of Science (AAAS) and their piece about the latest budget deal's implications for science. 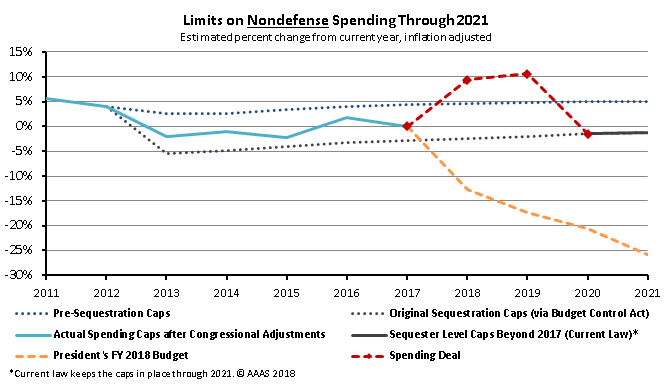 As our colleagues at the AAAS explain, federal investment in research and development (R&D) has maintained an 11-13% share of federal discretionary spending since the 1980s. Increasing federal R&D investment, even just to keep up with inflation, would therefore most likely be accomplished by raising overall discretionary spending. This is why the AAS has called for a bipartisan effort to raise the defense and nondefense discretionary caps via coalitions (including the Task Force on American Innovation, NDD United, Coalition for National Science Funding, and others) and independently. Until full-year appropriations bills are passed detailing federal spending, the exact benefit that any specific federal science agency will receive under the higher discretionary budget remains uncertain, though we have some indications. The AAS similarly joined coalitions like the Task Force on American Innovation and sent our own letter urging increased allocations for science agency spending if the budget caps were raised.

In other good news for the astronomical sciences, the final budget agreement additionally included $16.3 million for repairs to NSF's Arecibo Observatory (see p. 9 of the legislation's full text), which sustained damage when Hurricane Maria devastated Puerto Rico. The AAS Board of Trustees recently issued a statement in support of Arecibo staff, who not only stewarded the observatory during and after the storm, but also facilitated and provided emergency response to the remote communities around Arecibo in the aftermath of the hurricane.