Of Caps and Continuing Resolutions

As you may have observed, the federal government did not shut down earlier this month, though federal agencies were preparing for the possibility of a repeat of the 2013 shutdown. The threat of imminent shutdown is not entirely averted, however; the stopgap funding measure known as a Continuing Resolution (CR) that passed on Thursday, 7 December, only keeps the government open through 22 December 2017. How did we get here, and what will happen next?

When Fiscal Year 2018 (FY18) began on 1 October, Congress had still not completed the final step in the year's federal budget process, to resolve differences between the House and Senate appropriations bills, which annually designate the spending of federal discretionary funds. We discussed the House and Senate appropriations provisions relevant to the astronomical sciences previously; in some areas, the differences between the two chambers' bills — and the initial President's Budget Request (PBR) — are significant.

The AAS outlined its priorities for the astronomical sciences in FY18 in a recent letter sent by Executive Officer Kevin Marvel to the chairs and ranking members of the House and Senate Appropriations Subcommittees on Commerce, Justice, and Science (CJS). As is becoming the norm (see figure below), Congress once again both averted a shutdown of the federal government and neglected to come to an agreement on spending to pass an omnibus appropriations bill. This newest CR keeps the government open and operating at the same funding levels as FY17, and is, in fact, the second CR of FY18; the first was signed into law on 8 September, and kept the government open from the start of the fiscal year through 8 December. We are thus still waiting for the actual FY18 spending levels; last year, as is shown in the figure below from the Government Accountability Office, the final FY17 bill did not pass Congress until 5 May 2017. 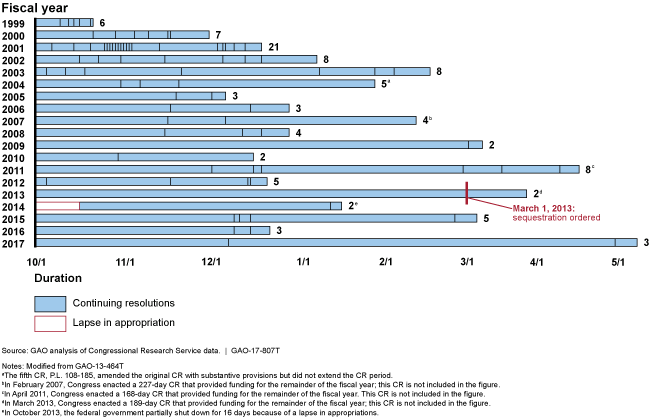 Complicating the process is the sequester, the across-the-board cuts that kick in if the discretionary fund appropriations rise above limits set via the Budget Control Act of 2011 (BCA) or subsequent updates to it. The BCA mandates the top levels (the "caps") for defense and non-defense discretionary (NDD) spending. NDD includes most civilian federal programs and agencies, including the ones most relevant to the astronomical sciences: NASA, NSF, and DOE. If a CR remains in place through 15 January 2018, the sequester will kick in. If an omnibus FY18 spending bill is negotiated, but no new budget deal is made by 15 January 2018, the sequester will kick in.

Kevin Marvel also sent a letter to House Speaker Paul D. Ryan, House Minority Leader Nancy Pelosi, Senate Majority Leader Mitch McConnell, and Senate Minority Leader Chuck Schumer. The letter urges Congress to come to a bipartisan two-year budget agreement that raises the non-defense discretionary caps for fiscal year FY18 and FY19, providing relief from sequestration. No new caps deal has been announced yet, though there are some reports of one under discussion, and the Center for a Responsible Federal Budget produced the graphic below to illustrate the reported deal, which would lift caps above pre-sequester levels: 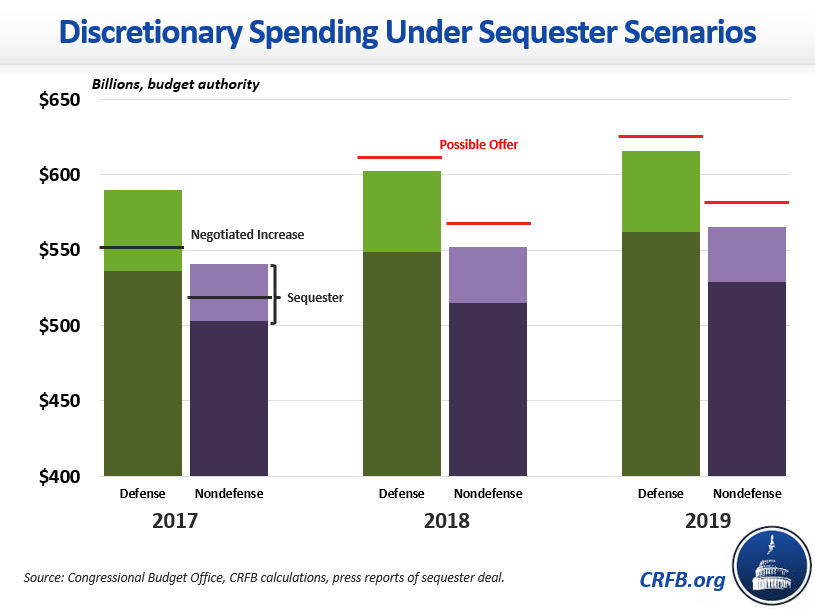 The AAS has previously taken stances and encouraged the members to take action on the discretionary caps a number of times:

In advocating for (at least) a two-year deal, the AAS and other organizations hope to offer some stability to federal science efforts in particular, which have struggled under short-term actions and funding instability in the context of long-term projects and objectives.

We likely have longer to wait than 22 December for a final appropriations deal to be announced; in additional to a potential caps deal, Congress is attempting to pass a final tax reform bill that resolves the differences between the House and Senate versions passed in the respective chambers in the last few weeks (see AAS Action Alert on the legislation). Congress has a number of other issues that may further impact the nature and timing of another CR or a final omnibus spending bill.