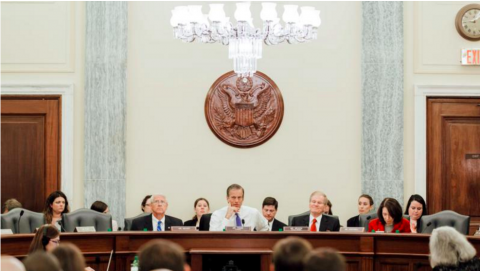 On 15 September 2016, the NASA Transition Authorization Act of 2016 (S. 3346) was introduced in the Senate by Senators Ted Cruz (R-TX), Bill Nelson (D-FL), Marco Rubio (R-FL), Gary Peters (D-MI), Roger Wicker (R-MS), and Tom Udall (D-NM). According to the Senate Committee on Commerce, Science, and Transportation press release, the legislation will provide "stability for NASA to sustain and build upon existing national space investments designed to advance space exploration and science with an overall authorization level of $19.508 billion for fiscal year (FY) 2017." Title I includes the authorization levels for NASA's directorates. See the table below where we compare these levels to recent appropriations levels; for more information on these appropriations levels, refer to previous posts about the Request, the Senate mark, and the House mark.

Title V focuses on advancing the space sciences; it states the importance of a balanced program and of following the guidance provided through the decadal surveys. Planetary science is discussed specifically as needing balance between small, medium, and large missions. The title instructs the Government Accountability Office (GAO) to continue to monitor the cost and schedule of JWST. The Wide-Field Infrared Survey Telescope (WFIRST) is included with the direction that progress should be made on the technologies and capabilities needed to complete WFIRST while maximizing the scientific productivity. The importance of the Mars 2020 rover is emphasized due to its impact on the long-term goal of landing humans on Mars. The title also indicates that a Europa mission that launches on the SLS should be supported.

On 21 September 2016, the Senate Committee on Commerce, Science, and Transportation will consider this and five other pieces of legislation.

In September 2016, the Senate Commerce, Science, and Transportation Committee passed S. 3346, with 7 amendments, by voice vote. Three of the amendments include language about commercial space cooperation, and one adds a section about small balloon and satellite payload development. S. 3346 passed the full Senate by a legislative process called Unanimous Consent on 10 December 2016. It was sent to the House for consideration, but the House did not have time to take action on the bill before the end of the Congress.