Status of Legislation at the End of the 114th Congress 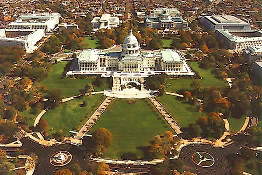 As the 114th Congress wraps up the year, we provide an end-of-year update for FY 2017, COMPETES, and NASA. In an update from October, we also discussed a space weather bill and a bill about open access to publications. There is no update to give on these bills. At this point (20 December 2016), Congress has adjourned sine die — without a day for returning. However, the Senate and House will be scheduling pro forma sessions at three-day intervals. During these sessions, a member of Congress will gavel in and out of session, however, no legislative business takes place. Remember that any legislation that does not pass this Congress must begin again in the 115th Congress.

The previous continuing resolution (CR) expired on 9 December 2016, and Congress passed a new CR that will last through 28 April 2017. As before, the CR extends FY 2016 spending levels for most agencies. The exception here is programs for which the FY 2017 request is lower that the FY 2016 spending level; those programs will be funded at the lower amount. Within NASA, this means that the ramp-down in the James Webb Space Telescope's budget continues as expected. However, it also means that the Planetary Sciences Division is operating with around $110 million less than in FY 2016. It will take some time for the operating budget to be made public, so it is not clear how this budget shortfall will be absorbed. To the best of our knowledge, the programs across the rest of NASA, as well as NSF and DOE, will be able to continue without interruption.

This CR includes extra funding for NASA's deep space human exploration program, the Space Launch System (SLS) and Orion module, as well as to repair damage at NASA centers from Hurricane Matthew. SpacePolicyOnline.com points out that "[b]y delaying action, the new Trump Administration will have a say in funding for FY2017 as well as FY2018 and beyond."

The Senate version of a partial COMPETES reauthorization — called the American Innovation and Competitiveness Act (AICA, S. 3084) — passed the Senate on 9 December and House on 16 December. The bill passed both chambers by a legislative process called Unanimous Consent. President Obama is expected to sign the bill into law.

S. 3084 is summarized in an AAS Policy Blog post and by AIP FYI. In our previous update about COMPETES, we noted that an amendment with authorization levels had passed. The final version that passed the House and Senate does not include these authorization levels. It does, however, include new sections — some of which are relevant to the astronomical sciences:

The Senate passed their NASA Transition Authorization Act (S. 3346) by Unanimous Consent on 10 December 2016. The bill that passed is the result of negotiations between the House and Senate, but the House has not yet taken action to pass this version.

The NASA Transition Authorization Act is not a full authorization of NASA. Instead, the bill represents Congress's vision of priorities for NASA — with the goal being to avoid disruption to these programs during the presidential transition. We have summarized the bill in a previous AAS Policy Blog post. Some key additions to advancing the space sciences section (Title V) include extrasolar planet exploration, astrobiology, near-Earth objects, the Stratospheric Observatory for Infrared Astronomy (SOFIA), and radioisotope power systems.