An Overview of the Midterm Assessment of Astrophysics Decadal Survey 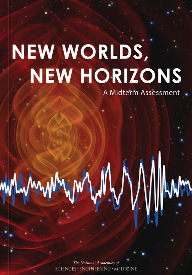 The 2010 astronomy and astrophysics decadal survey, New Worlds, New Horizons in Astronomy and Astrophysics (NWNH), is organized around the broad themes of Cosmic Dawn, New Worlds, Physics of the Universe, and The Larger Science Program. Across those four themes, NWNH set large-, medium-, and small-scale priorities for the ground-based and space-based programs. For the past 10 months, a committee has been conducting a midterm review of our progress on the priorities in NWNH.

The committee had four main tasks:

The midterm review process included presentations from the agencies, project directors, and other stakeholders in the community. Their report represents the culmination of the committee's work.

The committee organizes its discussion of scientific discoveries and technical advances around the four science themes from NWNH, and notes "these themes capture only some of the highlights of an extraordinarily rich palette of astronomical discovery that ranges from our own solar system to the edge of the observable universe, and from the first instants of cosmic time to the present day."

The committee explains that considerations of the programmatic context, i.e., the fiscal landscape, developments across the program, and the state of the profession, are "a factor in the committee's assessment...and recommendations."

The committee says that the overall fiscal landscape plays a large role in evaluating progress on the priorities in NWNH. In general, the budget assumptions used in NWNH were "more optimistic" that the actual budgets. The assumption for both the National Science Foundation's Division of Astronomical Sciences (NSF-AST) and NASA’s Astrophysics Division (NASA-APD) was that the budgets would remain approximately flat in fiscal year (FY) 2010 (inflation-adjusted) dollars. In reality, both budgets have remained flat in real-year dollars, which means that purchasing power has decreased; see figures below. Furthermore, schedule delays for the James Webb Space Telescope (JWST) delayed the availability for funding other projects in NASA-APD. For the Department of Energy (DOE) Cosmic Frontier program, the assumption was that the total budget would double over the decade. The budget reality for Cosmic Frontier has been consistent with this baseline plan.

The committee reports that the constrained budget environment has led to NSF increasing its interagency and international partnerships for ground-based astronomy. It has also led to the NSF Portfolio Review, which recommended that NSF divest from the Very Long Baseline Array (VLBA) and the Green Bank Telescope (GBT) and that the support of university radio observatories become a part of the Mid-Scale Innovations Program. The space-based astronomy programs in Europe and Japan are having impacts on the US-based astronomy program. In particular, there have more opportunities for NASA to collaborate with the European and Japanese space agencies (ESA and JAXA).

The committee considers the definition of balance to a key component to evaluating progress, because "not all readers interpret balance in a consistent manner." The committee's definition is that balance refers "to a viable mix of small, medium, and large initiatives on the ground and in space that optimizes the overall scientific return of the entire US astronomy enterprise viewed collectively. It does not refer to a balance of wavelengths, nor of astronomy subtopics."

The committee also addresses the state of the profession, though it lacked the resources needed to extensively explore the demographics discussion in NWNH. In general, the committee notes a concern about long-term job prospects because of the flat rate tenure-track faculty positions, that the situation for underrepresented groups has not improved, and about the low rate of success for grant proposals.

The committee makes two recommendations related to the ground-based program:

The committee points out that even fully implementing the divestment plan will not solve the "squeeze" between rising facility operations costs and the flat NSF-AST budget. "Moderate increases in the NSF-AST budget would have highly leveraged science impact as a consequence of these powerful new facilities."

Overview of the committee's findings for the ground-based program:

The committee notes that "despite a challenging budget environment, NASA-APD has maintained a balanced portfolio through the first half of the decade…" and indicates that the greatest challenge to continuing this balance is the cost of the JWST and WFIRST missions (more below).

Chapter 5: The Next Dedacal Survey of Astronomy and Astrophysics

The committee feels that the next decadal survey should continue to make use of the Cost and Technical Evaluation (CATE) process for all projects, both ground-based and space-based. The CATE process offers an analysis of cost and technical risks for each major mission.

The committee also advises that future decadal surveys should consider the full life-cycle costs of each mission, including design and development, construction, operations, pipeline data processing, and data curating. This is a normal standard for space-based missions, but it has not been for the ground-based missions.

The decision rules within a decadal survey offer strategic advice to policymakers on how to proceed with the science program when actual budgets deviate from the assumed budgets. The committee suggests that "future surveys could incorporate guidance to the government on how to reprioritize when budgets are significantly different from assumptions."

The process used for NWNH involved five Science Frontier Panels (SFPs) and four Project Prioritization Panels (PPPs). The panels evaluated the white papers submitted by the community based on science drivers and technical and programmatic issues. The survey committee then "assimilated the reports" into a single, comprehensive program. The committee notes that this process, while complex and time-consuming, ensures a thorough vetting of all options.

In planning for the next decadal survey, the committee "concludes that incorporating a detailed assessment of the health of the astronomy profession — its diversity, the effects of major funding issues, and pipeline issues, among other items — could be useful for the next survey and executed during the survey process or prior to it." The private sector, international groups, and the entire US astronomy community should also be engaged from the outset in the upcoming decadal process.

The entire report is publicly available through the National Academies Press.