FY 2016 Omnibus Will Be Better for Some Disciplines than Others 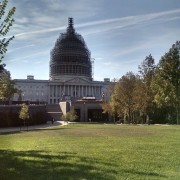 You may have seen the recent headlines or tweets about the Omnibus spending bill. All the excitement is over the fact that the conference committee has finally finished negotiating the fiscal-year (FY) 2016 appropriations, and the results are now public.

The 2,000-page document is now in the hands of the rest of Congress — and everyone else with an interest and an Internet connection. This means that we can see how the various agencies fared. Before we get distracted with an explanation of the funding situation for the astronomical sciences it's important to realize that there are still a few important steps before the appropriations saga of FY 2016 is over:

Specifics of the Omnibus

NASA and the Science Mission Directorate

The NASA top line represents a 4% increase over the amount requested in the President's Budget Request, with SMD 5.7% higher than the request. In this compromise both the House and the Senate got all (or nearly all) of the funds they wanted for planetary science and Earth science, though the directions for how to spend the funds within each division have been changed.

All House language regarding transparency and accountability has been replaced. Congress now "encourages NSF to continue efforts to implement transparency requirements" including explaining how each grant award serves the national interest. The House language regarding replicability of scientific research has also been replaced. Congress requires NSF to continue to make improvements in this area and to update Congress on progress, but doesn't stipulate a timeline.

The $880 million provided for Education & Human Resources is 8.5% less than the request but more than the previous House and Senate versions of FY 2016. Included in that number is funding for Historically Black Colleges and Universities, Hispanic Serving Institutes, the Tribal Colleges and Universities Program. Grant and scholarship programs related to broadening participation — Louis Stokes Alliance for Minority Participation, CyberCorps: Scholarships for Service, Experimental Program to Stimulate Competitive Research (EPSCoR), and informal STEM learning — are also included.

The Omnibus funds Office of Science at 0.2% more than the request and 5.6% more than FY 2015. Congress supports the priorities outlined by the Particle Physics Project Prioritization Panel (P5) Report.

If you should happen to have a burning desire to review the Omnibus, then you can find it here.