The Effect of Realizing My Changing Goals

Allow me to introduce myself: I’m Heather Bloemhard, and I’m the new John Bahcall Public Policy Fellow. I also just finished my PhD in physics at New Mexico Tech. It seems that I have been headed for a career in science policy since early in graduate school. At first this wasn’t deliberate, but by the time I announced that I would be leaving the traditional academic path in favor of science policy most of my peers were not surprised. I was incredibly lucky that my adviser was supportive throughout my entire graduate career. Had she not supported my decision to participate in what I call résumé-building activities, but what others might call distractions, I might not have had the confidence to apply for the Bahcall Fellowship. 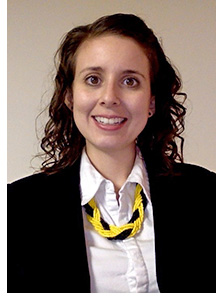 As a graduate student my research centered on observing the atmospheres of transiting exoplanets. I worked with my adviser to build a near-infrared, multiple-object spectrograph that was specially designed to characterize the atmospheres of transiting exoplanets, called the New Mexico Exoplanet Spectroscopic Survey Instrument (NESSI). When I wasn’t in the lab, I observed transiting exoplanets with the Infrared Telescope Facility (IRTF). My goals started to change between my second and third years of graduate school. That’s when I was elected an officer of the Graduate Student Association. As an officer I found myself discussing policy with the administration and relaying that information to my peers. There were some frustrating moments, to be sure, but I enjoyed serving as a liaison between graduate students and administrators.

During my fourth year of graduate school I started to plan for my next career step, and I realized that I wasn’t completely sold on the idea of the traditional academic path. One afternoon I was putting off debugging some code and searching USAJobs for things that I might be qualified for; I found a position at the Congressional Research Service (CRS) at the Library of Congress. I had never heard of the CRS, so I did some reading: The CRS “works exclusively for the United States Congress, providing policy and legal analysis to committees and Members of both the House and Senate.” One of the CRS’s divisions is Research, Science, and Industry. While I was reading I came across some mentions of science policy; over time I found that science policy merged science with a lot of my other interests, such as education, advocacy, and communication.

My next step was to prove to myself that I would enjoy this type of work by experiencing policy and science communication in different ways. I was selected to be a student panelist at the Domenici Public Policy Conference. The Conference is arranged by the Domenici Institute at New Mexico State University, with the express goal of giving students the opportunity to interact with experts on topics of state and national importance. Around this time I was moved onto a teaching contract to assist with the junior-level astronomy lab, and I was also admitted into the second cohort of the AAS Astronomy Ambassadors. All of these activities further convinced me that I didn’t want to spend my career at a computer debugging code; I wanted to engage with people. I like discussing policies with policymakers and with those the policies affect. I like discussing science with a wide range of audiences. I like the idea of advocating for science and helping scientists advocate for their science. And so I applied for every single science-policy fellowship that I could find. I consider myself fortunate to be the Bahcall Fellow and to have the opportunity to get paid to do all these things that used to be considered distractions.

I am looking forward to working with policymakers and scientists to understand the policies that are being considered and the science goals that are being pursued. I am excited about the prospect of educating each group about the other’s actions and goals. I will be in a position to advocate for science, which will allow me to foster my love of science while utilizing my other skills and interests. All of this will be in support of scientific discovery, which I will get to witness and say, “I helped with that!”