The President's Budget Request Just Dropped. How Did It Get Here?

Each year, the federal budget process kicks off with the introduction of the President's Budget Request (PBR). Or rather, that's where it seems to begin for those of us looking from the outside in. In fact, internal delibrations at federal agencies, and a back and forth with the White House Office of Management and Budget (OMB), have been ongoing for over a year before any of us on the outside ever see the PBR, when it's released in the spring prior to the start of the fiscal year (in October). In this post, we'll go through a basic outline of what's going on during the long lead-up and look at the roles the agencies and White House each play in the process.

This year, the process is running about a month behind schedule, with the request having dropped over the last two weeks beginning 4 March 2014 (actually some details are still yet to come out as of this posting on the morning 17 March).

At any given time, the various parts of the federal government are working on three budgets, the one being spent, the one about to start, and the one following that (illustrated schematically in the figure below). 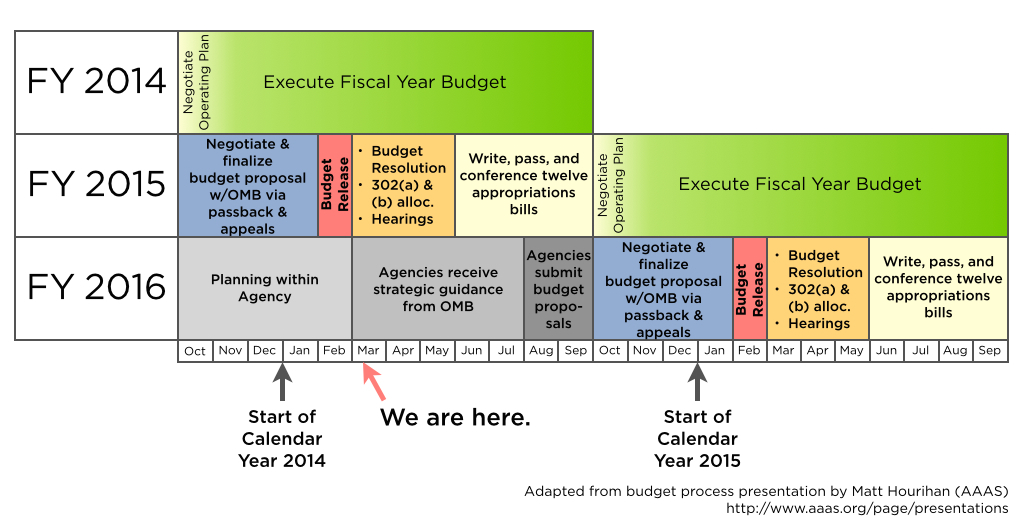 The fiscal year (FY) 2015 budget, which proposes spending that will not begin for (at least) another 7-8 months, has been in the works since around October 2012. While it has been occupying minds in various parts of the federal government, at any given time it has been sharing that head space with the FY 2013, FY 2014, and/or (currently) FY 2016 budgets.1

The current budgeting process, outlined above, was put in place by the Congressional Budget Act of 1974, which followed on legislation going back to the 1920s that established rules for authorizing programs vs. appropriating funds, defined a role for the Executive branch, and created OMB (previously, the Bureau of the Budget). Few of the rules governing the process are hard and fast; case in point, this year's PBR is arriving spread out and in March, not all at once in February.

To frame our discussion a little better, let's pick an agency; choosing completely at random... the National Science Foundation (NSF). Starting about a year and a half ago (so, October 2012), Division managers at the NSF were already getting started on internal planning. Within NSF's Astronomy (AST) Division, managers would begin by assessing their projects', facilities' and grants programs' needs, taking into account budgets for the current and upcoming fiscal years (which should have some budget clarity). They would also look at what new projects, facilities, and grant programs are on the horizon. For astronomy, these determinations depend heavily on the science goals and prioritizations outlined in the three decadal surveys for the astronomical sciences. 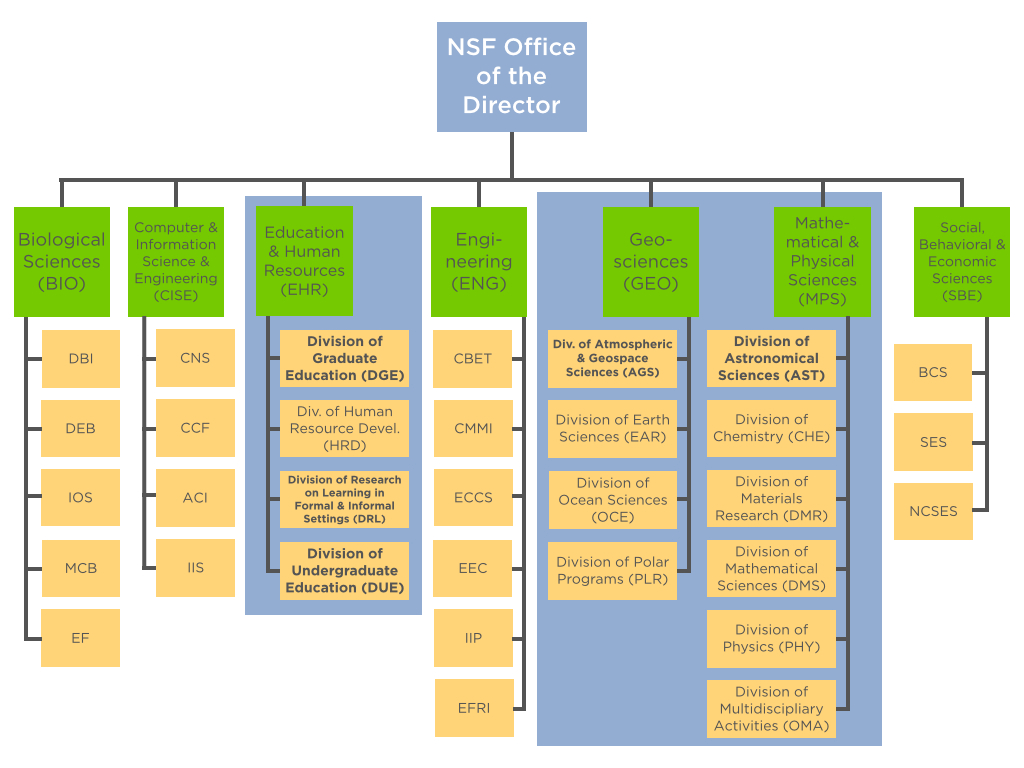 The figure above shows how NSF research units are organized. The AST division is just one division within its larger directorate, Mathematical and Physical Sciences (MPS; second green box from the right); MPS is just one of the seven research directorates that draw funding from the Research and Related Activities (R&RA) account, the NSF's largest budget line. So the AST budget filters up through these levels, where its whole portfolio comes up against competing priorities for the MPS directorate and then the Foundation as a whole. We can think of this as the bottom-up portion of the process, with division managers working with their resepective scientific communities to make the strongest case to their directorate managers for robust funding. These directorate managers then take their full portfolio up to the NSF Director's office to make their case on the Foundation-level.

In the spring about one year before the PBR release, OMB, in concert with the White House Office of Science and Technology Policy (OSTP), gets involved in the process, exerting a top-down pressure on all agencies. OMB is ultimately responsible for formulating the PBR, while OSTP is the office tasked with coordinating science and technology policy across the federal government. Unlike many other countries, the US does not have a "Ministry of Science" or similarly centralized science agency; instead we have many agencies—NSF, NASA, DOE, NIH, etc.—which each pursue science objectives in support of their own specific mission. OSTP serves as a driver and coordinator for broad science and technology initiatives that require multiple agencies to coordinate.

In order to make room for new inititatives and for bolstering Administration priorities, OMB's strategic guidance to NSF during the spring was probably something like: "take about... 5% off the top, and here are some suggestions about how to do that." This is where the process can begin to get adversarial. The Foundation might respond to this direction, as a beneficiary of NSF grants might hope, with a "Yea... We don't want to do that. How about a 5% increase?" Discussions percolate throughout the Foundation and within the relevant parts of OMB, but the OMB budget examiner(s) and the budget officers at the Foundation are on the front line. Each are getting direction from their bosses, bosses' bosses, and so on and some discussions will ultimately go over their heads, but their personal relationships can be instrumental in fostering a collaborative atmosphere for negotiations.

In September (a little more than one year from the start of the fiscal year), the NSF submits its proposal to OMB for consideration. At this point, OMB staff pour over the proposals looking for strategic savings to make room for Presidential priorities, which may come in the form of dramatic increases or decreases for certain accounts or whole new initiatives. Around Thanksgiving, OMB then passes back the budget proposal with its direction for the NSF; this is known colloquially as "passback." This passed back proposal may or may not contain dramatic changes, depending on the process of negotiations thus far and whether the NSF is a particular focus that year for Administration priorities among other things. The Foundation then has a limited opportunity to appeal this passback before the budget request is finalized. The appeals process varies by agency, largely based on the political position of the agency head—i.e., those who sit in the President's Cabinet have greater influence and access in the White House.

Throughout most of the negotiation, in the leadup to the budget release in February (or this year, March), OMB and OSTP are basically in lock-down mode. This is both because OMB staff are diving deep into agency program budgets and performance data as they evaluate budget requests, but also to prevent leaks as best they can—Presidential initiatives can't make as big a splash if the waters have been stirred up in advance. Once the Administration releases the PBR in the spring prior to the start of the fiscal year, the Foundation and OMB have reached some sort of compromise that ideally preserves important programs for the NSF and its stakeholders and contains the Administration's vision for a better tomorrow, or rather, a better seven months from then.

I find it's important to keep in mind that few, if any, of the budgetary decisions during this process are made solely on scientific grounds, though science plays a large part in many cases. Our federal government is, in an idealistic sense, responsible for furthering the national interest. This means many things, fostering a strong economy, improving the health of its residents, providing high quality education, and so on. The way these interests are bolstered is a political question, which is reflected in the types of new initiatives, budget cuts and increases that get proposed. As I've started to learn my way around here, I've found that being congnizant of this helps me understand not just how decisions get made but also how we, as a scientific community, might approach steering them in a more scientifically favorable direction.

With almost all the details of the FY 2015 PBR now released, we are working on more in-depth analyses of the request. In the coming weeks, look for a rundown of the details for NSF and DOE-Office of Science as well as a more in-depth look at the NASA Science Divisions below the top-line. The appropriators in Congress have set an aggressive schedule for the rest of the budgeting process this year, though political realities related to the mid-term elections may gum up those works. I'll try to keep you up to date as the machine lurches forward!

1Much of what is described here is drawn from presentations and blog posts by Matt Hourihan, Director of the AAAS Research and Development (R&D) Budget and Policy Program. Matt excellently covers the federal R&D budget across all federal agencies and program.