Summary: A report from SATCON2 describes how a concerted, well-funded, collaborative effort is needed to address the ongoing transformation of the night sky. 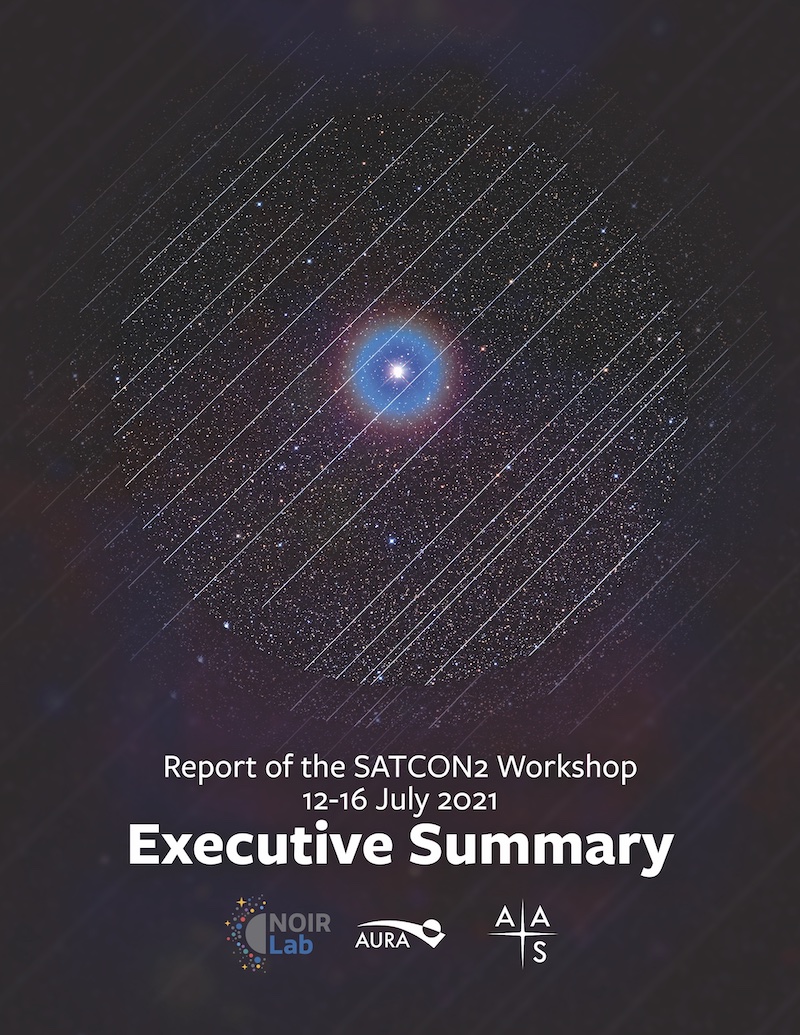 The Satellite Constellations 2 (SATCON2) workshop, held 12–16 July 2021, brought together more than 350 astronomers, satellite operators, dark-sky advocates, policy experts, and other stakeholders from 40 countries to discuss how to implement the strategies and recommendations emerging from the 2020 SATCON1 workshop to minimize the negative impacts of satellite constellations on astronomy and the night sky. The executive summary of the SATCON2 report is released today online. The full report, which will add the detailed reports of the four SATCON2 working groups to the Executive Summary, will be released in the near future.

The primary goal of SATCON2 was to develop specific, implementable paths to carrying out the ten recommendations agreed on at SATCON1. SATCON2’s two additional goals were to engage a considerably wider group of stakeholders in the conversations than had been present at SATCON1 and to explore existing policy frameworks, generating ideas for the development of policies capable of addressing an entirely new era in the exploration and use of space.

Four working groups were charged to prepare draft reports relevant to the workshop’s goals and to present their findings at the workshop itself. The 12–16 July 2021 sessions then informed the preparation of the final versions of the four reports as well as the executive summary.

Two of the working groups, Observations and Algorithms, explored some SATCON1 recommendations directly. The Community Engagement working group brought many new voices and perspectives to the issue, and the Policy working group examined regulatory framework and mitigation approaches from national, international, and industry viewpoints.

The Scientific Organizing Committee of SATCON2 calls for immediate, well-funded, comprehensive, and collaborative work to accomplish the activities set out by the working groups in the executive summary. The implications of the industrialization of space reach far beyond astronomy and aerospace, and it is our collective obligation to address them.

In parallel with these efforts, the International Astronomical Union (IAU) has issued a call for the establishment of a new Centre for the Protection of the Dark and Quiet Sky from Satellite Constellation Interference. The UNOOSA/IAC/IAU Dark and Quiet Skies for Science and Society II conference with support from NOIRLab has just concluded and the working groups are presently writing the final report.

The steady and now increasingly rapid growth of the number of satellites in low Earth orbit has the potential to transform the appearance of the night sky. While individual satellites can likely be designed to be invisible to the unaided eye, their trails will be easily visible to even entry-level amateur astronomy equipment and will be billions of times brighter than the sensitivity of major research facilities. In addition to the trails, diffuse brightening of the entire natural dark sky by scattering of reflected sunlight from satellites, up to a factor of 2–3 according to some calculations, is an increasingly real possibility. Beyond astronomy, there may be a variety of environmental impacts, including acceleration of climate change through upper atmosphere deposits, degradation of ocean and land health at sites of launches and re-entry, and increasing density of orbital debris.

It is incumbent on all who use space and the night sky as a resource — professional and amateur astronomers, satellite operators, policymakers, environmentalists, people who observe the night sky and who preserve their culture in stories in the stars, and more — to consider the myriad impacts on humanity of the industrialization of space and to establish a shared vision for the use of space that supports and respects all its users.

We are on the threshold of fundamentally changing a natural resource that since our earliest ancestors has been a source of wonder, storytelling, discovery, and understanding of ourselves and our origins. We transform that at our peril.

NSF’s NOIRLab (National Optical-Infrared Astronomy Research Laboratory), the US center for ground-based optical-infrared astronomy, operates the international Gemini Observatory (a facility of NSF, NRC–Canada, ANID–Chile, MCTIC–Brazil, MINCyT–Argentina, and KASI–Republic of Korea), Kitt Peak National Observatory (KPNO), Cerro Tololo Inter-American Observatory (CTIO), the Community Science and Data Center (CSDC), and Vera C. Rubin Observatory (operated in cooperation with the Department of Energy’s SLAC National Accelerator Laboratory). It is managed by the Association of Universities for Research in Astronomy (AURA) under a cooperative agreement with NSF and is headquartered in Tucson, Arizona. The astronomical community is honored to have the opportunity to conduct astronomical research on Iolkam Du’ag (Kitt Peak) in Arizona, on Maunakea in Hawai‘i, and on Cerro Tololo and Cerro Pachón in Chile. We recognize and acknowledge the very significant cultural role and reverence that these sites have to the Tohono O'odham Nation, to the Native Hawaiian community, and to the local communities in Chile, respectively.

The Scientific Organizing Committee of SATCON2 thanks the National Science Foundation (NSF), NSF’s NOIRLab, and the American Astronomical Society for their support of SATCON2.