Sixteen AAS members traveled to Washington, DC, from 16 to 18 March to advocate for strong and sustained support for the astronomical sciences as part of Congressional Visits Day (CVD), an annual event organized by the Science-Engineering-Technology Working Group (SETWG).

Prior to the group’s meetings with their elected representatives and/or members of their staff, this plucky group of astronomers, solar physicists, and planetary scientists participated in several intensive training sessions and interacted with the key division directors at NASA, the National Science Foundation (NSF), and the Department of Energy (DOE) Office of Science. After dividing into five teams, the group visited 52 congressional offices from 15 different states and the White House complex in one day! A number of the participants met their senator or representative in person, and many of the meetings led to useful follow-up requests and what we hope will be long-lasting relationships.

The AAS Executive Office and Committee on Astronomy and Public Policy (CAPP) would like to thank this year's CVD participants for volunteering their time and talents to advocate on behalf of the entire discipline. Seventy-five members applied to participate this year, and while we are only able to select a fraction of the total volunteers each year, we would like to extend our thanks to every member who applied. 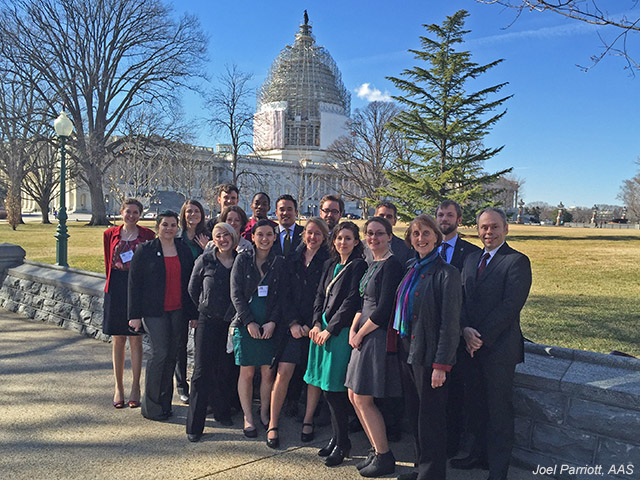