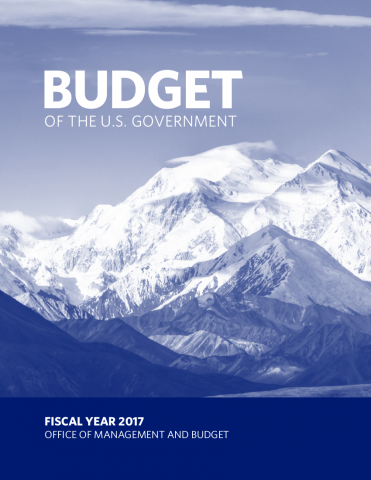 We've been waiting with great anticipation for the Fiscal Year (FY) 2017 President's Budget Request, and on 9 February 2016, it finally arrived. The release of the president's budget plan typically serves as the starting point for the public discussion about the next fiscal year's budget. If you're curious about the budget process, then we point you to a previous post which covers the topic in detail. This post will describe the funding levels of the largest funding agencies for the astronomical sciences — that is, NASA, the National Science Foundation (NSF), and the Department of Energy (DOE) Office of Science. At the end of the post, we'll include a list of other sources which cover science or research & development more broadly, different disciplines, and additional insights on these and other agencies.

The table below shows how the budget request breaks down for the relevant accounts, in millions of US dollars. Those of you who have been looking at tables like this for a while will notice a new column this year – Mandatory Budget Authority 2017. This so-called mandatory funding is a one-time spending increase over the discretionary caps. Each agency deals with this mandatory budget authority differently: NASA allocated these funds to specific projects, NSF considers it at the level of each division, and DOE lumps it all together in one pot for university grants. Where we have the information, we have included how the mandatory funds are distributed in the request. It should be noted that the administration officials have repeatedly stated that those projects with mandatory funding have not been prioritized higher or lower by the administration.

Because the mandatory budget authority is funding in addition to the discretionary caps, opinions vary on whether or not the plan for a mandatory budget authority will make it through the rest of the budget process. We'll leave the detailed discussion of this for a later post. For the purposes of this summation of facts, we're going to be looking at the total request, which includes these mandatory funds. This means that, in general, we will compare the total FY 2017 request level to the estimated FY 2016 level. And one last note about the table: the agencies' operating plans for FY 2016 have not been approved by Congress and made public, which is why the FY 2016 column is an estimate and is subject to change.

This request for NASA is down about 1% compared to FY 2016, and for the Science Mission Directorate (SMD) is nearly flat.

The overall request for Planetary Science is down nearly 7% compared to the FY 2016 appropriations. Because the Omnibus included explicit monetary values for the Interior Exploration using Seismic Investigations Geodesy and Heat Transport (InSight), the Origins-Spectral Interpretation-Resource Identification-Security-Regolith Explorer (OSIRIS-REx), and the Jupiter/Europa missions, we know that the request is lower when compared with the FY 2016 values. InSight is down by 85%, which is attributed to the fact that fabrication is finished and a new launch plan is pending. OSIRIS-REx is down by 77%, with the implied justification that the mission will be launching and so need less funding support. A Jupiter/Europa mission is down by 72%. The FY 2016 funds were intended to accelerate project formulation for a 2022 launch. The request does not reflect such an acceleration, and so the request returns the funding profile to be comparable to FY 2015. Additionally, roughly 60% of the requested funds for the Jupiter/Europa mission are categorized as mandatory budget authority.

When you consider the total request, the FY 2017 request is 6.9% higher than FY 2016. However, $85 million of that increase is categorized as the mandatory budget authority. Of this $85 million, $76 million is allocated to Wide-Field InfraRed Survey Telescope (WFIRST), which has a total request of $90 million (equal to FY 2016) and discussion of a 2025 launch.

Cosmic Origins, including Hubble, SOFIA, Spitzer, and Herschel, is supported with a total of $198.5 million. Physics of the Cosmos, including Euclid, Fermi, Chandra, XMM-Newton, and Planck, is supported with a total of $941 million. The Research line within Astrophysics is supported with $226.1 million, with $72.7 million for Research & Analysis grants. The Astrophysics Explorer line includes $129 million, which supports an Announcement of Opportunity in FY 2017. The budget line to continue operating the missions being included in the upcoming 2016 Senior Review would see a decrease of $25 million in FY 2017 under the president's plan.

Mission-related STEM activities within SMD are kept within Astrophysics by the Administration, though Congress pulled it out in the FY 2016 Omnibus bill. The Request includes $25 million for STEM activities, which is $12 million less than the FY 2016 appropriation.

Funding for the James Webb Space Telescope (JWST) is about 8% less than the FY 2016 appropriations. The requested funds fully support the October 2018 launch, which is on schedule. If you've managed to miss some of the project updates, then you should catch up on the exciting progress that they have made.

Funding for Heliophysics, including $25 million in mandatory funding, is up nearly 7.5% compared to FY 2016. This increase is to fully support the current program — including the launch costs for Solar Probe Plus (SPP) and NASA's contribution to the launch of the ESA-led Solar Orbiter Collaboration in 2018 — and a new White House priority on space weather. SPP and Solar Orbiter are located in the Living with a Star program, which is supported with $374.2 million. Based on the decision rules of the decadal survey, the 2024 launch of a mission to study global dynamic coupling is not supported in this request. Funding for the DRIVE Initiative is increased to support full implementation by 2020. Solar Terrestrial Probe is supported with $39.8 million. Heliophysics Explorer is supported with $104.6 million, which includes $49.4 million for ICON and $55.2 million for existing facilities (GOLD, IRIS, IBEX, TWINS, CINDI, SMEX-9, THEMIS, ACE, and RHESSI). The next Heliophysics Explorer is expected to be chosen and ready for launch around 2022.

NSF funding overall has increased by 6.71%. $400 million of the increase is categorized as the mandatory budget authority, and most of this is in Research & Related Activities. NSF has indicated, through their budget briefings and their Request Overview, that the mandatory budget authority would be used to fund exceptional grant proposals that would otherwise not be supported because of a lack of funds, with an emphasis on the NSF core programs and early career investigators. Based on estimates, NSF would be able to fund 800 additional highly-rated proposals, which would increase the NSF-wide grant proposal success rate to 23%.

Research within AST is 17%, or $11 million, higher than FY 2017. The request for Infrastructure includes an increase of 3%. Infrastructure is where all of the NSF facilities and MSIP are kept in terms of bookkeeping.

Most of the facilities will see modest increases to their operations budgets compared to the FY 2016 estimate. The operations costs for the Daniel K. Inouye Solar Telescope are starting to ramp up. At first glance, it looks like the NRAO operations budget has decreased substantially, but there is more to this story. During the re-competition of the management of NRAO facilities, which AUI eventually won, the Green Bank Telescope (GBT) and the Very Long Baseline Array (VLBA) were separated from the group of facilities. Operations for GBT and VLBA are now funded under a new line called Other Astronomical Facilities.

The Infrastructure line of the AGS division includes $4.1 million for Arecibo, flat compared to FY 2016 estimates. The Infrastructure line also includes $30.6 million for Research Resources, which is a 30% increase compared to FY 2016 estimates. This Research Resources budget line supports the development of advanced technologies for observing and predicting hazardous weather, including space weather events.

The total request for MREFC is down 3.59% compared to FY 2016 estimates. This reflects the fact that the National Ecological Observatory Network (NEON) construction has finished. The two AST projects under construction are the Inouye Solar Telescope and LSST. The Inouye Solar Telescope is planned to be complete in FY 2019, which means that we're in the midst of ramping down in the MREFC and ramping up for the operations. LSST's peak construction costs were in FY 2016, and the construction costs are beginning to ramp down. LSST is on schedule for completion in FY 2022, which anticipates operation costs to start ramping up in FY 2019.

The request for DOE overall is up 9.75% compared to the FY 2016 estimates; $2.3 billion of this is from the mandatory budget authority. Much of this increase goes to the Energy Efficiency and Renewable Energy program, but Office of Science gets a 6.1% increase in the Request. The Request for High Energy Physics is 2.89% higher than FY 2016 estimates. Cosmic Frontier, where dark matter and dark energy research are funded, is down 0.4% compared to FY 2016 estimates. This request supports LSSTcam and DESI moving into fabrication in FY 2017. The Axion Dark Matter Search Generation 2 (ADMX-G2), Large Underground Xenon (LUX) and ZEPLIN (ZonEd Proportional scintillation in LIquid Noble gases), and SuperCDMS-SNOLab experiments are all supported. Planning for the next large-scale Cosmic Microwave Background (CMB) experiment will continue in FY 2017.

If your favorite project isn't included in this summary, or if you'd like more information, then please get in touch via email or Twitter.